Almost 30 years ago one of the most spectacular extragalactic events was visible to the naked eye. February 23, 1987 Sanduleak -69° 202, a blue supergiant went supernova in the Large Magellanic Cloud, a companion of the Milky Way. It actually blew up about 161,000 B.C., but its light arrived here in 1987.

Supernova 1987A was the brightest supernova in over 400 years. Astronomers were able to study the evolution of the supernova in detail, with light intensity peaking in May and fading over several months. They were able to gain tremendous insight into the core-collapse of a supernova.

The brilliant dotted ring is from 1987A’s supernova shock wave slamming into and heating up the gas shed earlier from the star. The ring “turned on” several months after the star went supernova.

The red figure 8 is a very unusual feature that scientists suspect is from material the star ejected much earlier.

Scientists are still searching for the remnants of the blue supergiant. It is most likely a neutron star hidden by dust and gas; however, enough material could’ve fallen back onto the neutron core that it further collapsed into a black hole. 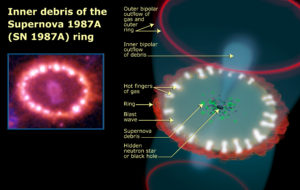 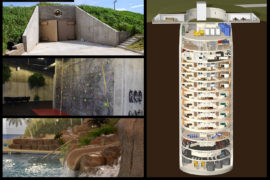